How To Say A Car In Korean

There are everyday words that are learned over time when studying a new language. These little words may seem meaningless when you are studying them, but once your sentences start to come together, you will find that knowing a certain word here and there will really add up and get you speaking in beautiful Korean sentences! So, today, you will learn how to say ‘car’ in Korean.

How To Say A Car In Korean

This is how to say a car in Korean: 자동차 [ja-dong-cha] 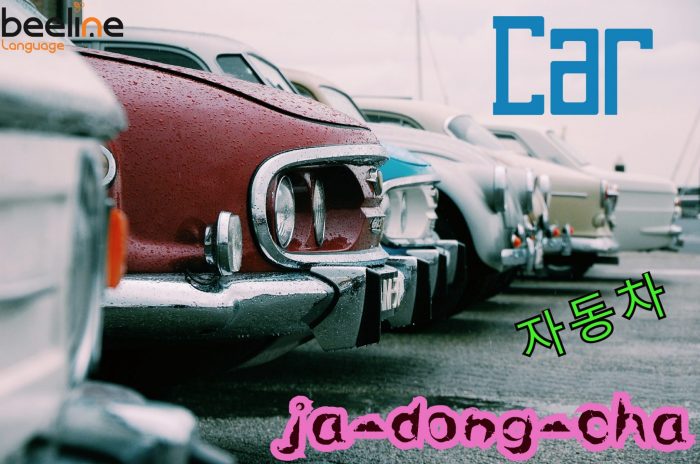 There seems to be too many vehicles in Seoul.

Between a subway, an airplane and a car, which is the fastest?

Other Similar Words To A Car in Korean

While it is completely normal to call it 자동차, some people just shorten it to 차 [cha].

You can also hear older Korean generations saying the word 자가용 [ja-ga-yong], which is essentially the same meaning.

Truck in Korean is called 트럭 [teu-reok], just as it sounds like in English.

While a mini-van is called 미니밴 [mee-nee-ban], as it sounds like in English.

A Word About Using Borrowed Korean words from English

It’s important to keep in mind that in cases where something like a ‘mini van’ is called a ‘mee-nee-ban’ in Korean, you must pronounce this word in Korean pronunciation.

Yes, this sounds a little backwards – the Korean language uses – and mispronounces – and English word, but you, as an English speaker are supposed to then pronounce this English word with a Korean ‘accent’, if you will.

The reason for this?

To be understood! Remember, you are trying to speak Korean! This means that you are also speaking words that are borrowed, stolen or kidnapped from English!

But… you’ll be understood 🙂