(Video) How to Say Sister in Korean

When you started to learn Korean, did you try to teach your family members how to say a few words in Korean? Sometimes the best method of learning Korean is to teach someone else, as it would mean that you have to be an expert on everything you would teach someone. It is also a great review tool for yourself. Today, this Korean word will be able to help you open up a conversation with your family members in Korean by teaching them how to say sister in Korean.

How to Say Sister in Korean

Here is how to say sister in Korean: 누나 [noo-na] for older sister and 여동생 [yeo-dong-seng] for younger sister

If you would like to use the universal term for ‘female sibling’, you can use the term 여자 형제 [yeo-ja hyung-jae] which literally translates to female sibling in Korean. However, it is an less commonly used term when used in speaking. 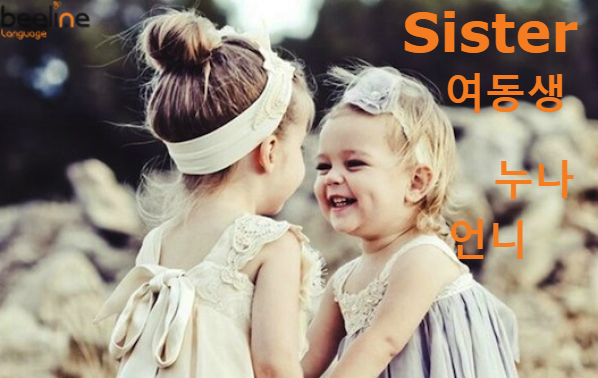 I will introduce my sister to you.

*note here that the ‘sister’ is referring to an older sister, so 누나 was used.

My younger sister wants to ask you something.

I have one younger sister, and two older sisters.

Sister in Korean in the Formal Way

As we have mentioned previously, it is important to address the person in formal way of speaking to show the respect towards the other party. Therefore, you will see many phrases have ‘yo’ attached at the end, which usually helps reforming the word into a formal form of the phrase. However, when describing sister in a formal way, there are couple different ways to describe them.

Now that you know how to use the word ‘sister’ in various forms in Korean, please go and let your friends know how many 누나 and 여동생 you have!