(Video) How to Say Nice to Meet You in Korean

Once you arrive in Korea, you will encounter many people that you never met before. The first thing you say is “nice to meet you”. Today we are going to learn how to say nice to meet you in Korean.

How do you Say Nice to Meet You in Korean?

반갑습니다 [ban-gab-sum-ni-da]. As you would be greeting someone who you just met, you would use the honorific or very formal way to say this.

How do you Politely Introduce Yourself in Korean?

The most polite way to introduce yourself in Korean is to say: 만나서 반가워요 [man-na-se-ban-gap-sim-nida] which means ‘It’s nice to meet you for the first time.’

It’s Nice to Meet you in Korean Informal way

Other Ways to Say Nice to Meet You in Korean

만나서 반가워요. It’s nice to meet you for the first time. (formal).

만나서 반갑습니다. It’s nice to meet you for the first time (very formal). 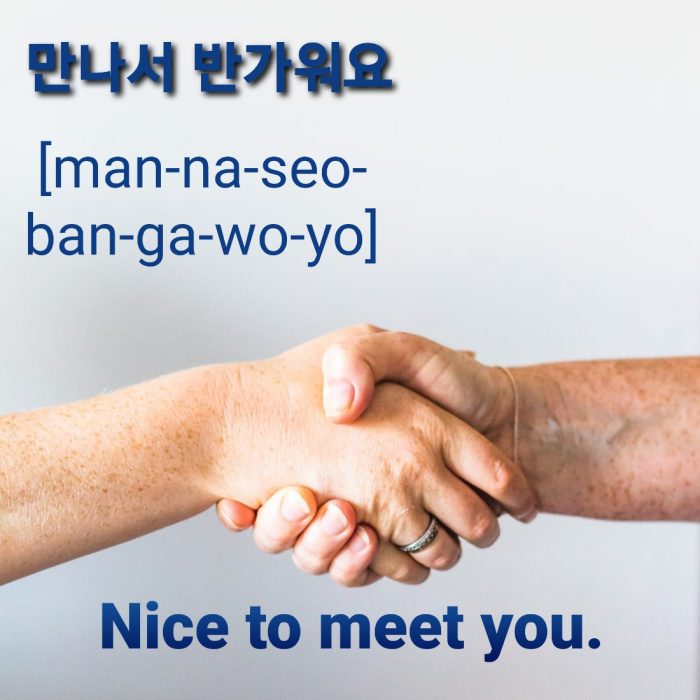 Bangawoyo (반가워요) means ‘nice to meet you’ in Korean in the formal way.

When speaking to someone the same age as you, you can say 반갑다 [ban-gap-da] or 반가워 [ban-ga-wo], which is an informal way of saying 반갑습니다. If you want to be more formal, you should say 만나서 반갑습니다[man-na-se-ban-gab-sum-ni-da] which is a direct translation of ‘nice to meet you’.

Annyeonghaseyo (안녕하세요) means ‘hello in Korean‘. You could say this when you meet a person for the first time, but it is better to actually greet them formally using one of the sentences above.

안녕하세요 can be used in many different ways, including greeting someone in the morning, afternoon or evening, instead of saying ‘good morning, good afternoon or good night, you can just use 안녕하세요 Annyeonghaseyo.