(Video) How to Say I Don’t Know in Korean

When you started to learn Korean, there were possibly many things that you may not have been very familiar with. Did you know that most Korean people like to walk on the left side of the street? Did you know too, that it is culturally frowned upon when you lift your bowl while you are eating in South Korea? There are many small of these Korean cultural aspects that we find ourselves not so familiar with.  Do not worry if you did not know about these before, as today we will learn how to say I don’t know in Korean, just in case you might run into one of these uncomfortable situations.

How to Say I Don’t Know in Korean

Here is how to say I don’t know in Korean: 몰라요[mo-la-yo]

You can use the word 몰라 [mo-la] which is directly translated as ‘do not know’ and put 요 [yo] at the end to create a meaning to the word.

Sometimes, we say this in a different form, 모르겠어요 [mo-reu-get-sseo-yo] which can be directly translated into ‘I do not seem to know well’. This phrase is widely used in Kpop and Korean Drama, so it is nice to know.

I don’t know well about this question

Jane, I don’t know the meaning of this sentence that well.

I don’t know what to do now. 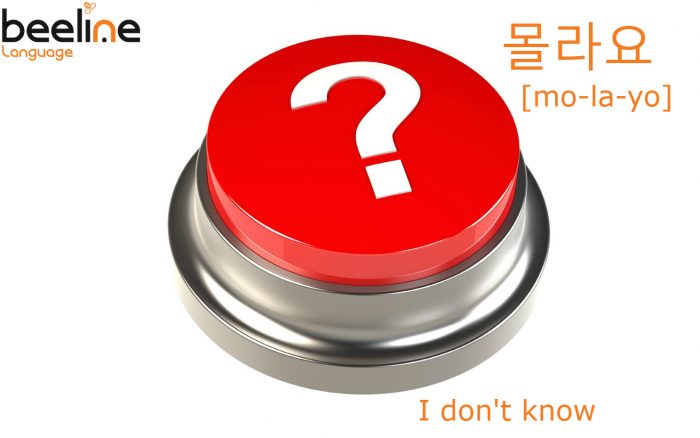 I don’t know in Korean in the Formal Way

Therefore, you will see many phrases have ‘yo’ attached to the end, which usually helps reform the word into the formal form of the word. However, I don’t know in Korean already comes with ‘yo’ at the end, and to make it more formal, we have to use a different form entirely:

When you are around elderly people or with people whom you are not too familiar with, refrain from using informal form, since this form can be perceived as rude to someone who does not know you very well.