Gentleman in Korean: How To Say Gentleman In Korean 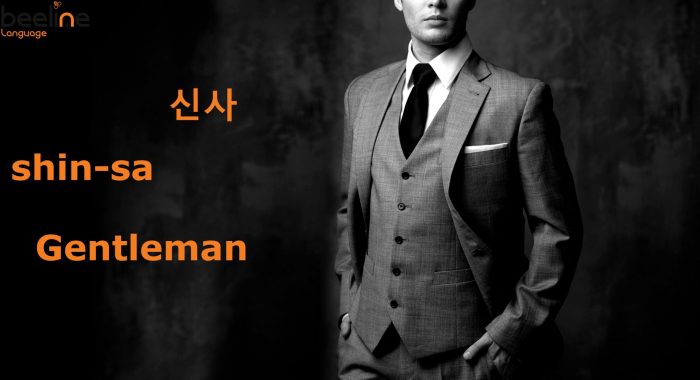 Beeline Language Korean is all about learning the Korean language and culture. Did you know that Korean culture is believed to have started about 2333 BC? If you investigate the Dangun Wanggeom and Gojoseon, you will find out that it was the first ever Korean kingdom. In our previous lessons, we have learned many different slangs like 멘붕, 극혐 and 품절녀. Also, in the last lesson, we have learned how to say lady in Korean. Today, we will learn how to say gentleman in Korean, with these rules in our mind.

How to say Gentleman in Korean

This is how to say gentleman in Korean: 신사 [shin-sa]

Ladies and gentlemen, thank you for showing up here.

I have to ask this gentleman what time it is.

Other Ways to say Gentleman in Korean

Korea is known to have many different words for one meaning. In Ancient Korean kingdom called Cho sun dynasty, a different social classes existed and the gentlemen of the ruling classes were called 양반 [yang-ban]. They were mainly consisting of civil servants and military officials. Many of them were the exemplary scholars of the Confucian idea. They would have maids and butlers at home and their wives are usually called 마님 [ma-nim], as we have previously learned in our earlier lesson.

Now you know how to say gentleman in Korean, share with your friends about what you have learned today!