By Andy LeeSeptember 6, 2018 No Comments 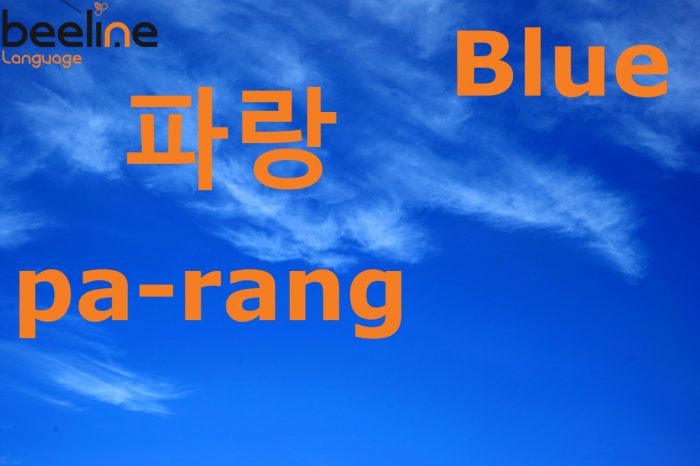 Beeline Language Korean is all about learning the Korean language and culture. In our previous lessons, we have learned many different slangs like 멘붕, 아이돌 and 노잼. Also, we have covered a lot of words that would be used by young Korean generations today. Remember the Korean flag that I have mentioned in our earlier lesson? The Korean flag is consisting of three colors in a white background. Red, Blue and Black. Previously, we learned about how to say red in Korean. Did you guess what you would be learning today? Correct, you will learn how to say Blue in Korean.

How to say Blue in Korean

This is how to say Red in Korean: 파랑 [pa-rang].

*Note that when the word 파랑 is describing another object or noun, then the word slightly changes to 파란 [pa-ran]. E.g. 파란색 [pa-ran-sek] Blue Color. Also, 파랑색 [pa-rang-sek] is still acceptable.

At the traffic light, you stop at red light, and you go at blue light.

*Note that Korean people usually refer to green light as ‘blue light’. This does not mean the color is blue in Korean, but it is generally accepted as 파란불 to describe the green light in the traffic.

Other Ways to Call Blue in Korean

There are more than one ways to say blue in Korean. Thus far, you have learned how to say 파랑, but you could also say 푸른 [poo-reun] to describe blue colors. For example, ‘blue sky’ in Korean would be often called 푸른 하늘, instead of 파란 하늘.

Now you know how to say Blue in Korean, you have learned another word in Korean today!