(Video) How to Say Good Morning in Korean

In the Korean language – unlike with the English language – there are not many greetings. Most of them consist of 안녕하세요 [an-nyon-ha-se-yo], which can be translated to ‘hello’ in Korean. However, today we will learn how to say good morning in Korean to add to your arsenal of Korean greetings! .

How to Say Good Morning in Korean

Here is how to say good morning in Korean: 좋은 아침[jo-eun a-chim]

Usually when we talk to our friends, we use the informal version of the good morning, which is 좋은 아침, but when we say good morning to other people we do not know that well, we like to add 입니다 at the end, making it formal.

Other Ways of Saying Good Morning in Korean

Did you sleep well?

Good morning (in the formal way) 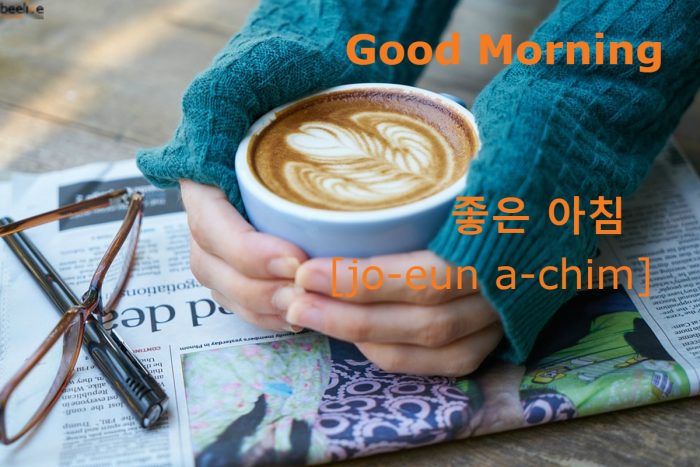 Note here that 안녕하세요 was used before saying good morning.

This can be omitted, however, in Korean culture, it is normal to say 안녕하세요 every day that you meet them.

Even before saying good morning, it is wise to use 안녕하세요 in formal settings to avoid any etiquette issues that may arise.

Good Morning and Other Greetings in the Korean Language

As we have mentioned previously, there are many different ways to say good morning and other greetings in the morning.

A good thing to keep in mind is that Korean is heavily set on the value and beliefs of  Confucianism, which is built on an ancient religious foundation to establish the social roles, and transcendent ideals of traditional Chinese society.

Therefore, we generally like to have a more cheerful tone for morning greetings where we can have a calmer, more quiet tone when we exchange evening greetings.

There are many different hand gestures and body postures that we have to be aware of to follow the true protocols of Confucianism, however, the heavily westernized-influenced society in South Korea has younger generations who are less in touch with the traditional values of the Confucianism.

Now that you know how to say good morning in Korean, be sure to practice every day by saying this to your friends!