What is Bulgeum? Korean Slang for Friday Night in Korean 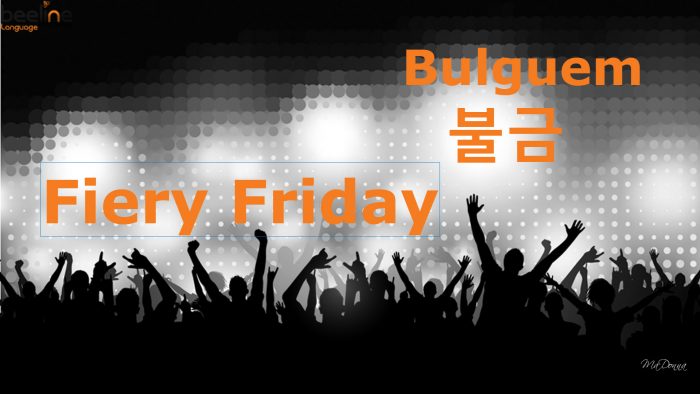 When you learn to speak and write Korean, you will find a lot of words that are just made up, and cannot be found in a regular dictionary. Beeline Language Korean will look at some of these slang words and explain to you, so you would know what these words or phrases mean. Today, we will with learning the word 불금[Bulgeum], which is a popular word created by young Koreans celebrating the start of every weekend on Friday night!

What is Bulgeum and how was it created?

불금 [Bulgeum] is a mixture of the Korean words for “Fire” and “Friday”. 불 [bul] means fire, and 금 [geum] is short for 금요일 [Geum-yo-il] which is Friday. Although, people do not mention 밤 [bam] ‘night’, it is implied that 불금 bulgeum is referring to Friday Night.

So, what does this 불금 or Fiery Friday night really mean? Well, it just means that you party until late night, almost till the flames are fused off.

Today is fiery Friday night, I am home alone, watching a movie.

Although 불금 became a popular phrase now, Korea used to have 6 work days per week, which means they used to work from Mondays to Saturdays, with Saturdays usually caught short. Korean people are considered as one of the hardest working people in the world. They have the third highest average working hours per week in the world. Thus, Therefore, instead of 불금, they had the word 불토 [bul-to], which is a combination of words “fire” and “Saturday(night)” , quoted from토요일 [to-yo-il] which is Saturday in Korean.

However, as the society evolves, more and more people seek the balance between work and life, and the government encouraged people to have two day weekends, to increase the productivity rather than keeping them long hours in the office.

Now that you know how to say bulgeum and when to say it, let us know what you will do on this week’s bulgeum?