(Video) How to Say Excuse Me in Korean

When you start to learn Korean, you will soon learn that Korean people think politeness and formality are two of the most important values that they look for in a person. Today, we will learn how to say excuse me in Korean, so you are able to escape some potentially awkward situations!

How do you Say Excuse me in Korean?

Here is how to say Excuse me in Korean: 실례합니다 [sil-lye-hap-ni-da]

실례 [Sil-lye] comes from the direct translation of discourtesy and 합니다 [hap-ni-da] just describes the noun. The direct meaning of this Korean phrase is ‘let me be discourteous’.

Similar to ‘excuse me’ in English, this implies that you are about to be discourteous to others, so the tone of the phrase should always be firm yet cautious and calm.

Note that we refrain from using this phrase too much, and often, you are better to say ‘죄송합니다’ [jweo-song-hap-ni-da] or ‘미안합니다’ [mee-an-hap-ni-da] (meaning ‘I’m sorry’) if you know what you did was rude and would like to apologize to a person. 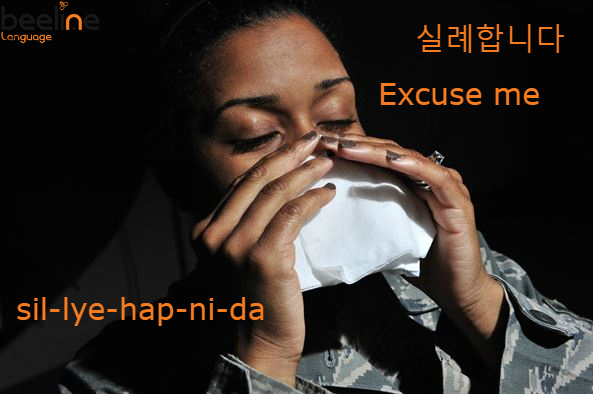 Excuse me here for a bit.

Excuse me, but who are you?

Note here that I combined 실례 [sil-lye] and 하지만 [ha-jee-man] (‘but’ in Korean) to excuse myself with one word, 실례지만 [sil-lye-jee-man] that can imply the meaning ‘excuse me, but’ in one word that connects to the next phrase.

‘Chogi-yo’ (저기요) is another way of saying excuse me in Korean. It essentially means ‘I’m here’, letting the other person be aware that you are present and require attention.

What does Yogiyo mean in Korean?

‘Yo-gi-yo’ is another way of saying excuse me in Korean, which is essentially saying ‘over here’. This is something you would say to a friend rather than to someone who is older than you, as it could come off as a bit rude.

Excuse me in Korean in the Formal Way

As we have mentioned previously, it is important to address the person in formal way of speaking to show respect towards the other party.

In business settings 실례합니다 may be good enough, but when you are with the elderly people, you might want to replace the 실례 with 결례 [gyeol-lye] which is utmost highest form of ‘discourtesy’ in Korean.

Now that you know how to say excuse me in Korean, don’t be afraid to go mingle with this new culture – just do not forget to be polite and say 실례합니다 when necessary!

You must follow the social etiquette that may be culturally different from what your culture is used to. Still, you will run into some of the rare situations where you just simply do not know what to do, or what to say.